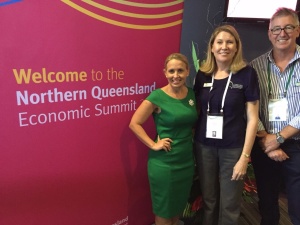 Last week, the Premier hosted her government’s inaugural Northern Queensland Economic Summit in Cairns.  Mayors and economic development organisations from north of the Tropic of Capricorn attended with some 200 investors from throughout Australia and overseas.

It was a successful event, with Capricorn Enterprise on behalf of Livingstone Shire Council now following up on some positive leads and planning investor visits in the New Year.

Presentations from state government Ministers were strong and full of confidence and good will for both business and investors.

Treasurer Curtis Pitt and Minister for Employment and Industrial Relations and Minister for Aboriginal and Torres Strait Islander Partnerships reported that Queensland’s economy is growing faster than any other state.  He talked about the government’s $180 Million Advance Queensland initiative and said “we have an open mind about how we do business –  Queensland is embarking on a new era of growth.”

Minister for Education and Minister for Tourism Kate Jones said “If we work together it will be a win win.”

Minister for State Development and Minister for Natural Resources and Mines Dr. Anthony Lyneham stated “mining will remain the major driver of the Queensland economy.  You have a supportive Industry and Government.”

Minister for Agriculture and Fisheries Bill Byrne said “this government will do everything we can to connect investment with growth and export opportunities.”

Minister for Housing and Public Works and Minister for Science and Innovation talked about an age of digital and business disruption.  Her message was about “a government that will provide you with certainty.”

As 2015 draws to an end after what has been a challenging year for business and industry, by continuing to work together, we look forward to these aspirational messages from state government transforming into real business growth in 2016 for the Capricorn Coast, Rockhampton and greater CQ.