A small national park, which includes a volcanic plug north-east of Rockhampton, has officially regained its original name Baga, replacing a deeply offensive name connected to segregation laws in the US.

Member for Keppel and Assistant Education Minister Brittany Lauga said the name change was a long time coming and she had fought beside the Darumbal People to have the park returned to its traditional name. The mountain and the park have been known as Baga for 60,000 years and it’s only been for the past 150 years that it had been called anything else, causing a lot of hurt in the local community.

The gazetting of the park is a significant step forward for the Darumbal People and for the entire region.

The Department of Natural Resources and Mines oversees the naming of places.

Returning national parks to their traditional names is an important step in showing respect in acknowledging the connection to country of First Nations people in Queensland.

The area between Rockhampton and Yeppoon is geologically important with about 12 volcanic plugs. Baga and Gai-i are part of the same Dreaming legend.

The 144 hectare Baga National Park is undeveloped, with no formed walking tracks and no facilities. For safety reasons, QPWS discourages climbing up the rocky scree slopes and cliffs. Camping is not permitted. 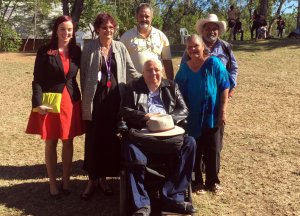