Jason Claire MP, Shadow Minister for Resources and Northern Australia also addressed the audience and it was refreshing to hear both Opposition and Government agree on the importance of Northern Australia in supporting major infrastructure development in water, roads, ports and rail for the North!

I had the honour of providing the Vote of Thanks to our Northern Australia Alliance Chairman Trent Twomey (Chairman Advance Cairns), our Political Leaders in Government and Opposition, as well as all of our Guests.

Our meetings were very productive with Ministers and Shadow Ministers listening intently to our business and industry groups about specific priority projects and policy ideas for Northern Australia including water, roads, ports, rail as well as more localized priority projects including Rookwood Weir, a Convention Centre in Yeppoon and infrastructure support and opportunities for Great Keppel Island.

Special thanks to Federal Member for Capricornia Michelle Landry MP who assisted me with a base office whilst at Parliament House – her hospitality was outstanding!

Read more about how the vision of a stronger northern Australia is being realised at northernaustralia.gov.au where you can access the statement and implementation report. 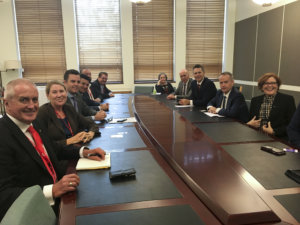 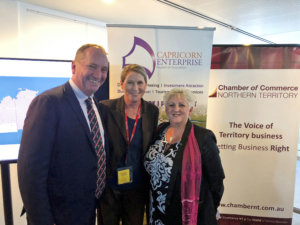