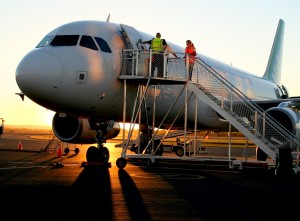 Featuring the third longest runway in Queensland and the ninth largest in Australia, the Rockhampton Airport prides itself on being able to handle freight of any size or shape. The proven experience of the Airport has contributed to its involvement in international and domestic military operations.

The Rockhampton Airport is exceptionally well serviced with multiple flights to and from Brisbane daily, direct flights to and from Mackay and connections on to other ports around Australia and internationally. Airlines that fly into Rockhampton include Qantaslink and Virgin Australia. It is also the welcoming destination for 560,000 domestic passengers every year.

Located 100km south of Rockhampton is the internationally recognised Port of Gladstone, one of the largest ports on Australia’s east coast and responsible for handling billions of dollars worth of cargo each year, including 67 million tonnes of coal.  With expansions having increased its handling facilities, when complete, it will have a through port capacity of 70 million tonnes.

The Wiggins Island Coal Export Terminal, in conjunction with the RG Tanna Coal terminal, allows coal exports to 150+ million tonnes  annually. In addition there are projected trade trends to 2015 with new markets of LNG and Aluminium industries to affect the port.

By Coach and Bus

Greyhound Australia operates from the central bus terminal in Rockhampton with multiple services connecting Rockhampton with Brisbane, and Cairns daily. Services are also available to Emerald and Longreach. Youngs, Sunbus, Rothery’s Coaches and Dowies are the major providers of bus services and tours across the region. Bus Queensland provide services from Rockhampton to Toowoomba via Moura and Biloela.

Rockhampton is a major Queensland Rail centre with the ability to handle close to 200 million tonnes of rail freight each year.

Queensland Rail’s Traveltrain operates train services daily to Rockhampton from Brisbane and Cairns and extend west to Longreach. High speed ‘tilt-train’ services run almost daily between Brisbane and Rockhampton. ‘Spirit of Queensland’ and ‘Spirit of the Outback’ trains run via Rockhampton to the Tropical North and Outback, offering an experience that is more than just a train journey.

The Rockhampton Region is the base for several large trucking companies, focused on moving products to market areas. Rockhampton is located at the junction of the Bruce, Capricorn, Burnett, Dawson and Leichhardt Highways and the city streets have been designed to provide smooth flow-through to truck, commercial and passenger traffic.

The Rockhampton Region transport businesses are frequently involved in logistical planning for unusual items of machinery and plant required at the neighbouring mines. The expertise is there to help you move anything you need to, in or out of the region.

Major highways link the region with all parts of Queensland and the Southern States, these include:

Rockhampton’s existing Fitzroy River bridges, constructed in 1952 and 1980, are fast approaching capacity and currently funnel all traffic into a small area of the city. Construction of an appropriately located flood-free third bridge to reduce growing traffic congestion and redistribute through- traffic away from the busy city centre is now a near term priority.

Relocation of the existing North Coast Railway from Denison Street in the city centre is also a high priority as train length and frequency increase, and as the conflict between the rail and state and local road networks increases. Load limits on the existing Alexandra Street rail bridge and slow transit times through Rockhampton also impact on the efficiency of rail operations.

A western realignment of the Bruce Highway and third bridge will link Rockhampton’s growth areas at Parkhurst and Gracemere as well as providing connectivity with the CBD, Base Hospital and Airport. This link will also provide improved access from the Australian Defence Forces Western Street facilities to the Shoalwater Bay Military Training Area and further north.

Improving the flood immunity of the Rockhampton Airport is also critical; levee and combined levee-road options are being investigated in conjunction with the proposed western alignment of the Bruce Highway.

When combined with a $36 million Bruce Highway Safety Package project at Terranova Drive, the full scope of works resulted in the duplication of 4.9km of highway through the northern suburbs of Parkhurst and Glenlee.

This project was delivered as joint venture by McIlwain Civil Engineering Pty Ltd and SGQ Pty Ltd and is a strategic link for the state of Queensland, providing connectivity from Brisbane to Cairns. The Rockhampton Northern Access Upgrade focuses on addressing safety and capacity issues, widening the Bruce Highway to four lanes between Rockhampton-Yeppoon Road intersection and Ramsay Creek, north of Rockhampton.

Project construction commenced on site in December 2018 and was completed and open to traffic in 2020. For more information, click here.

The $74.99 million commitment to 4-lane the Capricorn Highway between Rockhampton and Gracemere will enhance safety and highway capacity by improving connectivity and travel times for highway users.

This project was delivered by Fulton Hogan.

The Capricorn Highway Duplication project focused on addressing the capacity of the highway between Rockhampton and Gracemere to cater for the traffic volumes that exceed 18,000 vehicles per day.

Major construction started in October 2019 with completion in mid 2021. An average of 187 direct jobs were supported over the life of the project. For more information, click here.