LUCKY WINNERS OF CAPRICORN HOLIDAYS STAYCATIONS ON THE CAPRICORN COAST

Cameron Shearer from Gladstone won the Rockin Rocky Three Day Adventure and will enjoy a 3 day pass to the Rockin Rocky party, accommodation at the Empire Apartment Hotel, a meal for two at the Great Western Hotel, and guided tour at Koorana Crocodile Farm. 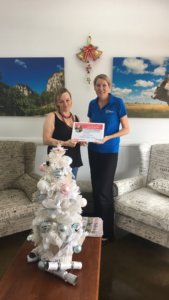 Rachel Jones from Rockhampton (pictured) won tickets to One Hot Night in Rockhampton (featuring Busby Marou, Amy Shark, Pandamic & Timberwolf), accommodation at the Edge Apartments, a $100 Headricks Lane voucher and a $100 Capricorn Caves voucher, she was very excited when she collected her prize from the Capricorn Enterprise office.

The Triple M stereo street patrols also gave out some amazing prizes over two weeks. Thank you to all our wonderful Capricorn Enterprise members who donated these fantastic prizes and the incredible support we received from APN, Southern Cross Austero and Cooper McKenzie.

The Capricorn Holidays Summer Holidays promotion targeted half a million local residents within the 400km radius drive market across Central Queensland to spend their summer holidays on the Capricorn Coast!

Promoted under the Capricorn Holidays banner, we showcase fantastic holiday deals in the Capricorn Coast and Rockhampton region, across all media channels, with a new television commercial, radio promotions, digital marketing and newspaper inserts all aimed at enticing locals to spend their summer in region and support local businesses.

And it seems that early results of on-line booking platforms is showing positive results for our Summer Holiday Season with new data from Wotif.com revealing that accommodation searches for Rockhampton over the Christmas and New Year holiday period are up 55%, compared to 2016.

Capricorn Enterprise chief executive Mary Carroll said “this result comes off the back of our recent $50,000 Summer campaign which targeted the 400km radius and included three major package prizes, two of which are the three day Rockin’ Rocky at Great Western Hotel and the other being Busby Marou’s One Hot Night Concert in December. The third major prize was a holiday at Great Keppel Island Hideaway.”

“Whilst the summer holidays are traditionally busier for the coast and islands, having major concerts in the Beef Capital over the Christmas and New Year period, as well as the return of Fire in the Sky on New Years Eve will definitely have a major positive effect on our visitation this summer.

“Busby Marou have just finished their Postcards from the Shellhouse tour in NSW and these local lads promote Rocky, Yeppoon and Great Keppel Island at every single concert, so we are sincerely indebted to their genuine support of our destination. We can’t buy this sort of publicity.

“What will be a great end to 2017, will be a fantastic start to 2018 with the Commonwealth Games and Beef Australia just around the corner. The Falkland Island team will be training in Rockhampton thanks to the Commonwealth Games pre-training bid document prepared by Capricorn Enterprise” she said.
Deals can be found on the campaign page www.capricornholidays.com.au/summer