TV Crews from Keppel Islands to the Central Highlands This Week 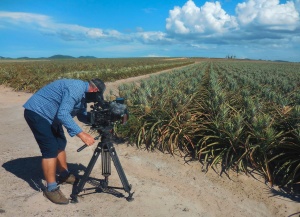 This week, we host two film crews in region, TPD Media filming the Sandstone Wilderness of Carnarvon Gorge (part of the SGBR Sandstone Stories Project being led by GAPDL on behalf of the 3 regions of Capricorn, Gladstone and Bundaberg) and a new television series called “Our Town”, due to air on Channel 9 in the coming weeks.
Following Latitude 23 along the Tropic of Capricorn from the Southern Great Barrier Reef to the Sapphire Gemfields, this half hour show (Our Town) isn’t your regular travel show, but aims to include people and places in our local towns and communities which make up the very fabric of our home.

Faces and places include local artists and musicians, our indigenous, ANZAC and European history, our pineapple and beef industries, island life, education opportunities, and so much more.  Great Keppel Island, Yeppoon, Emu Park, Rockhampton and the Sapphire Gemfields are all featured with a number of beautiful locations and colourful characters interviewed to inform viewers about what makes their towns, ‘Our Town’.

We know television shows about destinations has some of the best cut-through to potential viewers, but it is a significant financial investment.  This particular television opportunity, recommended by Tourism and Events Queensland, but which came after our annual budgets had been allocated, was only made possible due to a financial collaboration between Capricorn Enterprise, Livingstone Shire Council, Rockhampton Regional Council and Central Highlands Regional Council.  We also thank our local ‘talent’ for giving up their time and resources to bring this project to fruition, under very challenging weather conditions!