“Critical Infrastructure to support both community and visitors is the key to Great Keppel Island reaching its potential with increased tourism product, operators and jobs.”

“Government at all levels has an opportunity to work together to provide the necessary infrastructure to propel the island into one of the most visited tourism destinations in Australia, but we need collaboration and partnerships between our politicians and operators, not an ongoing public stoush between individual lease holders and our elected representatives.  We have lost valuable time over the past few years and many of us are frustrated, but I truly believe if everyone focuses on positive outcomes for all, our community will reap the rewards for decades to come.”

That’s the clear message from Capricorn Enterprise chief executive officer Mary Carroll, who has been relentless in her support for the region’s tourism industry including the development of Great Keppel Island, lobbying to all levels of government and all sides of politics to create opportunities for not just the island, but the greater destination.

“Great Keppel Island is a community with businesses and residents on both lease-hold and freehold land.   They pay significant rates, lease fees and tax to local, state and federal governments respectively and they are crying out for funds to be returned to island infrastructure which will benefit everyone.”

These include assistance to:

“Just like mainland businesses and residents in our populated communities, island businesses and residents pay rates and taxes, but they don’t have the luxury of being able to tap into water, power, sewerage or weekly garbage collection.  It costs four times as much to run a business on an island compared to the mainland with every visitor to our islands spending money on the mainland before and after they get there.”

“It should be acknowledged that the Federal government provided $250,000 to assist with the erosion issue at Putney Beach post TC Marcia in 2015, but TC Debbie earlier this year interrupted the revetment works and the race is now on to protect the beach from more erosion should another major weather event occur this summer; with  Livingstone Shire Council providing heavy duty equipment to assist in moving sand and the State government extending the lease terms to provide long term business surety on the island.”

“Capricorn Enterprise and our operators have invested significant time, effort and funds into product development and marketing of this jewel in our Southern Great Barrier Reef crown, but we desperately need government assistance for critical infrastructure.”

“In a meeting earlier this week with Great Keppel Island operators, local, state and federal politicians, the urgency expressed around a number of issues was certainly understood by everyone in that room.”

“We need a three tier government approach working in partnership with all of our island businesses and residents sooner rather than later if we are to realise the full tourism potential for Great Keppel Island and the greater destination.” 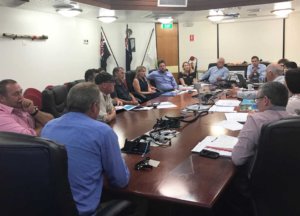