The Southern Great Barrier Reef was once again a very popular choice for potential travellers at the recent Flight Centre Travel Expos held in Melbourne, Sydney and Brisbane. The Travel Expos offer exclusive travel deals on airfares, hotels, tours, car hire and cruises giving people the opportunity to research, compare and book a dream holiday under the one roof.

In partnership with Bundaberg North Burnett Tourism and Gladstone Area Promotion and Development Ltd, Capricorn Enterprise was represented under the Southern Great Barrier Reef on the Queensland stand along with other Regional Tourism Organisations. Surprisingly, the Queensland stand was the only domestic product exhibiting at the Flight Centre Expos this year, all the other exhibitors were international, which was a great coup for our amazing state!

This is the fourth year that Capricorn has been represented at the Flight Centre Expos under the Southern Great Barrier Reef destination and the SGBR brand has certainly gained a lot of momentum. There was a lot of interest in visiting our region:

At least two (2) separate couples had spent their honeymoon on Great Keppel Island and are keen to go back. A couple from Sydney enquired about holding a wedding for their son and daughter-in-law on Pumpkin Island.

Over 70,000 people attended the Flight Centre Expos in Melbourne, Sydney and Brisbane and approx. 1,150 SGBR brochures were handed out over the six days. 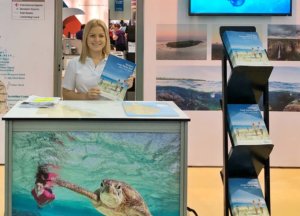