The preclusion of JMKelly to tender for almost $90Million of State government work in CQ which led the company to launch successful legal proceedings with QCAT (Qld Civil and Administrative Tribunal), proved too financially draining for the company, announcing it cannot continue to trade. Locked out of state government tenders has taken its toll on the company, forcing it to appoint administrators. The JM Kelly Group has historically contributed approximately $100 million to the local economy each year. The family-owned group, established in 1961, has been one of the state’s largest privately owned construction companies, currently employing almost 230 local people including almost 40 apprentices, and is one of the few construction companies with its head office based regionally in Central Queensland and not South East Queensland. 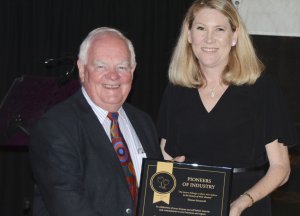 In 2015, Geoff Murphy was named one of Queensland’s most distinguished builders. The 2013 Rockhampton Region Citizen of the Year was honoured with the Distinguished Constructor Award by The Queensland University of Technology for his integrity, lifetime achievements and contributions to the profession.

Inducted to the University’s Construction Hall of Fame, Mr Murphy who started out as a carpentry apprentice at the age of 17 and began his career in Rockhampton at age 20 – was acknowledged for his leadership, breadth and depth of work and his commitment to his community and staff, including their training and development.

Mr Murphy was sighted for his “strong rapport with employees” and for initiating thousands of apprenticeships and traineeships across Queensland over six decades.

A 1992 Graduate of Harvard Business School’s Owner-President Management programme, Geoff built JM Kelly into one of Queensland’s largest privately owned construction companies as was recognised as Queensland’s Chief Executive of the Year in 1986 and 1998.

Mr Murphy, his family and staff have left their mark across the state with hundreds of major projects from Brisbane to Cairns, including major resorts, apartment buildings, schools, hospitals and significant government infrastructure projects.

JM Kelly, one of the most awarded project management firms in Queensland, constructed Rockhampton’s Empire and Rockhampton Hospital building complexes as well as Salt Yeppoon and the Keppel Kracken on the Yeppoon foreshore.

In October 2011, Geoff Murphy and JMKelly celebrated Fifty Years of local jobs by raising funds for Cancer Council Queensland at the Jubilee Celebration held at the Robert Schwarten Pavilion at the Rockhampton Showgrounds.

Hundreds gathered to reflect over five decades of incredible achievement by Geoff Murphy and the JM Kelly group.

At that time, Geoff Murphy was also Chairman of Beef Australia and the CQNRLBid team, so it was no surprise to learn that all five of the Murphy children work in the JM Kelly business because they hold great respect for the leadership, passion and drive exemplified by their father!

Many landmark buildings on the Capricorn Coast and throughout Central Queensland were constructed by the group.

In 1983, Iwasaki Capricorn International Resort Motel was described in local media headlines as ‘luxury among the sand dunes’.  Then in 1990, the Great Keppel Island hillside villas were constructed as the latest stage to the GKI Resort.  The Pilbeam Theatre & Art Gallery (1979), The David Motel (1964), The Leichhardt Hotel (1975), Harbour Heights at Rosslyn Bay (2007), Rockhampton Library & Community Centre (2008), School of Arts Rockhampton Refurbishment (2009), Yeppoon Town Hall (2011) are all creations of JM Kelly.

The largest shopping centre between Maroochydore and Townsville, Stockland Rockhampton has had a few facelifts over the years by JM Kelly from the beginning, with construction of the Rockhampton Shopping Fair in 1985, followed by stage two in 1988, then more recently, the Stockland expansion completed in 2011.

With offices in Rockhampton, Mackay and Brisbane, the JMKelly group can be very proud of their achievements from 1961 to 2011.  As Geoff Murphy jokes, they are now knocking down (or refurbishing)  buildings they built thirty, forty and fifty years ago.  Here’s wishing you another fantastic fifty years and construction of the brand new Resort on Great Keppel Island in the not too distant future!