A region on the rise!

Our region is on the rise with the latest statistical releases from the Australian Bureau of Statistics (registered businesses and population) and the Department of Employment (employment) painting a positive picture for the Capricorn Coast and Rockhampton region.

With a number of the major projects either commencing during the first quarter of 2019 or progressing through to their final design phases and commencing in various stages during the second half of the year, the immediate area will experience high activity as it relates to business/industry engagement and skilled workforce demand. This is already being reflected in population, business and employment growth in our region as depicted in recent official data releases.

There were estimated to be 118,705 residents across the region in 2018 with the regional workforce also growing to 61,446 persons while the percentage of unemployed persons has decreased to 6.9% from 7.5% December 2017.  Regional Economic Development Manager at Capricorn Enterprise, Neil Lethlean said, “Seeing increasing numbers of people either working or looking for work, while unemployment rates decrease is a great indicator of increasing confidence across our region.”

Much of this growth has occurred in Yeppoon and Emu Park which have had average annual growth rates of 1.3% and 2.4% respectively over the past five (5) years.

Mr Lethlean further stated, “While the number of registered businesses on the Coast increased to 2,913 in 2017-18, workforce expansion has also been continuous every quarter since December 2017. Increasing infrastructure development and greater confidence in the economy has resulted in higher numbers of people working or looking for work, 19,094 persons, while the proportion (and actual numbers) of unemployed persons is estimated to have decreased to 5.1% and is lower than the rate across Queensland, 6.2%!”

“Favourably, there is evidence that the extensive list of infrastructure projects (with an estimated value of $3.5Billion) are providing employment opportunities for the local workforce.” 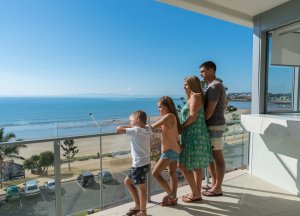