Hear Ian focus on the QRC as an independent body representing the commercial developers of Queensland’s minerals and energy resources. Resources contribute $1 in $5 of the Qld economy, 1 in 7 jobs, supporting  in excess of 20,000 businesses across the State and only covering 1% of the Qld land mass. 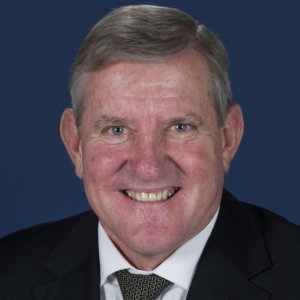 Ian was elected to Federal Parliament as the Member for Groom in October 1998 and is Australia’s longest serving Federal Resources and Energy Minister and the Coalition’s longest serving Federal Industry and Innovation Minister with over 14 years of experience in both Cabinet and shadow ministerial positions. Ian has extensive experience across the resources and energy, agribusiness, science and innovation, skills and training and manufacturing and industry sectors.

Ian retired from the Federal Parliament in May 2016.

Before entering federal politics, Mr Macfarlane was one of the Country’s most active agripoliticians. Mr Macfarlane previously farmed peanuts, sorghum and wheat, and ran cattle in Queensland’s Burnett region. He was President of the Queensland Graingrowers Association for seven years, President of the Grains Council of Australia for two years, and simultaneously held executive positions on the Queensland and National Farmers’ Federations.

Mr Macfarlane is married to Karen and has two adult daughters. He lives in Toowoomba, Australia’s largest provincial inland city.