News broke yesterday in southern media that an ambitious cryptocurrency consortium is planning a world first to raise over $200 Million dollars to purchase the development rights to construct the Great Keppel Island Resort, with lessee Tower Holdings retaining 12 per cent of the GKI tokens worth around $1 each, with buyers investing anywhere from $1000 to $100,000 per round.  This ‘left field’ and ‘out of the box’ news caused a media frenzy and an announcement by Tourism Minister the Hon. Kate Jones during Parliament sitting in Brisbane.

With such a remarkable report, one would be forgiven for thinking it might be a joke.  But jokes aside, if the Blockchain finance group don’t raise the funds within the short term, it appears the deal is off anyway.

So, just how legitimate is this global momentum to disrupt the traditional financing model in regards to this multi million dollar tourism development on a Southern Great Barrier Reef Island?

With at least one other serious overseas contender expected to enter into a Heads of Agreement with Tower Holdings, the next two months of due diligence are certainly going to be interesting.

Both Tower Holdings (Lessee) and the State government (Owner of the Land) are potentially faced with a rather unusual bidding war between a traditional financing model and one that has been fraught with scepticism since its global inception.

It is critical to note, that this expression of interest phase between potential investors and Tower Holdings is the next major step towards any sale of the development rights to construct a new Resort.

The State government’s commitment of $25 Million to deliver water and power (and hopefully communications cable) to Great Keppel Island has certainly been a game changer for potential investors.

And the focus and attention by the State government to expediting this major resort development is high on the list for both our Member for Keppel Brittany Lauga and our Tourism Minister the Hon. Kate Jones.

One thing is for certain, Capricorn Enterprise and our existing tourism operators on Great Keppel Island will continue to work hard to promote what we do have, not what we don’t have.

For the past decade, our existing accommodation (300 beds and 5 operators) and tour operators in Keppel Bay have spent much time, money and resources (despite natural disasters and southern media telling the world that the island is closed) in ensuring that our destination continues to offer exceptional natural and man-made experiences for our visitors from Australia and overseas.  We look forward to the development of a new Great Keppel Island Resort as soon as possible, but in the meantime, this issue is sure to play out in the media with more twists and turns….. 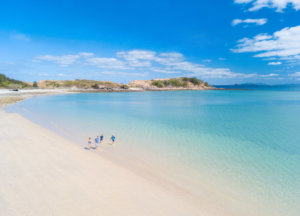