Collaboration is key to stretching limited resources further and there is no better example than this five thousand dollar example!

Europe/UK is one of our traditional key western markets to the Capricorn Coast and Southern Great Barrier Reef, particularly reflected in steady growth from German visitors.

For an investment of only $5,000 in the first year from Capricorn Enterprise and a total of $135,000 combined from the seven RTOs, TEQ Europe matched that funding dollar for dollar to reach a $270,000 campaign budget for the 2018/19 financial year!

Campaign content was agreed at the commencement of the campaign by all parties for the five participating precincts along the Great Barrier Reef – Tropical North Qld, Townsville, Whitsundays, Mackay, Southern Great Barrier Reef, and based on the investment, SGBR received 10% of specific content and product promotion of contracted properties across the entire campaign.  This has included a focus on our SGBR islands – Great Keppel, Pumpkin, Heron, Wilson, Lady Musgrave, Lady Elliot Islands.

The key travel periods for this market are the European winter/spring and school holidays and TEQ collaborated with key Tourism Trade Wholesalers in Germany, with whom our industry is contracted.

The $270,000 campaign included Agent training, Digital, Radio, Dive magazine insert 18,000 circulation., Train billboards and resulted in an additional 500 flight bookings to Brisbane and 750 to Cairns, Campervan hires, Wholesale packages sold, 3,000 website visitation and increased the general awareness of the incredible health of the Great Barrier Reef and the diversity of experiences along its 2,300 kilometres of coastline.

By partnering with our RTO colleagues and TEQ, we can stretch our dollars so much further, particularly in the international markets which are financially out of reach for us to promote by ourselves.

Our international visitation to the SGBR has increased from about seven percent to nearly ten percent of our total visitation over the past few years and it has been a very focused effort in ensuring that our operators on the ground are contracted with tourism wholesalers and inbound tour operators to materialize marketing efforts into bookings which reflect the return on investment.

In the noisy world of social media, the German market is probably one of the most conservative when it comes to dreaming then booking their Australian holiday.  The tourism trade distribution is key to the German market and the Great Barrier Reef is their most sought after experience in Queensland.

Our Southern Great Barrier Reef destination offers all of the experiences in a clean, green environment that is important to not only the German visitor, but all of our western market visitors.

Due to the campaign’s success, we have all now agreed on the second phase of this campaign for 2019/20, which will include the Nordic region and this second phase will also focus on the mainland experiences along the Great Barrier Reef.  Tourism trade partners going forward will be Boomerang Reisen, Tourlane, Explorer Fernreisen, TUI, Best of Travel Group, FTI Touristik and Travel Essence, with the campaign focusing again on Sales training, Dive insert, Social Media, Tourism Trade press and a major GBR familiarization, focusing on the diversity of experiences both below and above the water on the islands and the mainland along one of the world’s greatest wonders – the Great Barrier Reef.

Now that’s what I call Collaboration with a Capital ‘C’! 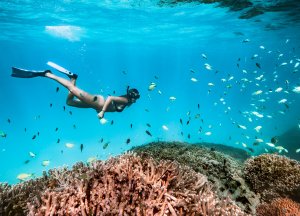