General Manager, Kylie Smith and Executive Chef Matt Smith proudly accepted the Award at the gala event in Brisbane last night, acknowledging the commitment and passion of their hard-working team who they believe are true ambassadors for the region.

“To run a successful restaurant that is open from 7:00am until late, seven days a week, requires a dedicated team who believe not only in the product we provide, but truly treasure the spectacular part of the world in which we operate and serve,” said Kylie.

“This award isn’t just about our business and team. It’s important to us that we play our part in promoting our region as a food tourism destination and put the Capricorn Coast on the Australian Culinary map.”

The Awards are judged by an independent team of trained judges who anonymously visit the venues to determine the restaurant/café winners. The scores are based on the entire dining experience from food to the customer service experienced when the judges anonymously dine.

Capricorn Enterprise CEO, Mary Carroll is thankful to have experiences such as The Waterline Restaurant operating so exceptionally. “The Waterline Restaurant should be proud of their achievements. Running a hospitality business isn’t easy – there’s a lot of blood, sweat and tears that goes into to making it work. But when you get the right mix of staff, produce and service, the results can be extraordinary.” 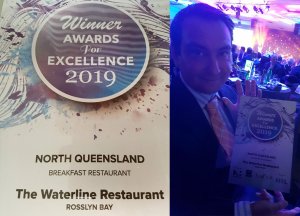 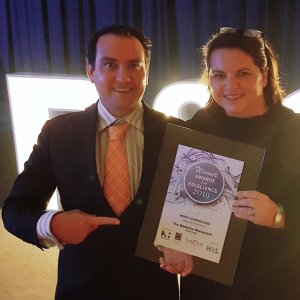