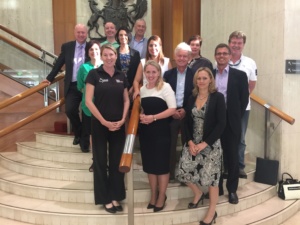 For the first time in twenty five years (25), the State government has committed long term funding for Regional Tourism Organisations (RTO’s) in Queensland which enables Capricorn Enterprise to plan for three (3) years in partnership with its local government and business stakeholders, instead of year on year.

However, $300,000 pa must be matched dollar for dollar by Local Government and $93,000 pa minimum must be matched by the tourism industry, with Capricorn Enterprise demonstrating in an annual activity plan, a $786,000 pa spend on providing specific tourism destination and marketing services to the region, which stretches from the Central Highlands in the west to the Keppel Islands in the east.

Our current tourism activity plan includes the management by Capricorn Enterprise of the Accredited Visitor Information Centres in Rockhampton and Yeppoon, open 363 days a year, a service the Organisation provides for the broader community on behalf of local government and businesses, and thanks to a team of dedicated volunteers who work with our two Visitor Information Centre Supervisors.

As Chair of Queensland’s Regional Tourism Network, I  am impressed by Minister Jones’ clear understanding of the need for long term planning and collaboration for destination marketing which also provides business confidence in Queensland’s great regions, the back-bone to our state and national economy.

Since the formation of Capricorn Enterprise in 2010, we have seen a 9% growth in visitation and 29% growth in overnight visitor expenditure to CQ in 5 years to 2015, which has been achieved by hard work and great partnerships with state and local government, local businesses, event organisers and community groups, and our neighbouring regional tourism organisations.

Minister for Tourism the Hon. Kate Jones MP announced four (4) year funding of $100 Million per annum for Tourism and Events Queensland (TEQ) at the beginning of their current term of state government.

Twenty-one ($21 Million) pa of that is distributed to the official thirteen (13) Regional Tourism Organisations (RTO’s) by TEQ for destination marketing and on-the-ground tourism support.

As Chair of the Queensland Regional Tourism Network, I sought similar long term funding and in November 2015, Minister Jones announced that the 13 RTO’s would receive a confirmed three (3) year funding.

The Board of Tourism and Events Queensland (TEQ) only recently ratified the specific amounts to be distributed to the state’s thirteen (13) RTO’s.

Along with Capricorn Enterprise’s annual $393,000, a further $393,000 pa has been committed to Gladstone Area Promotion and Develpment Ltd (GAPDL) and $393,000 pa to Bundaberg North Burnett Tourism (BNBT) in recongnitiion that the three RTO’s work closely together under the Southern Great Barrier Reef Destination brand which has seen incredible results over the past five years.