Last week our very own Capricorn region was the centre of attention for a high profile European Media visit. After many months in the planning between Capricorn Enterprise, Tourism and Events Queensland and numerous businesses throughout the region, 7 journalists descended on our region all the way from Europe. With a combined international readership of over 7 million people, this visit is by far the most significant international media familiarisation tour we have ever had the pleasure of welcoming to the region.

Visits like these do not just happen – a lot of work is done behind the scenes pitching destinations and planning logistics before a commitment is made from any international media to attend. Capricorn Enterprise has invested almost $7,000 into this activity, Tourism and Events Queensland has covered the cost on all international flights, and last but not least many of our operators hosted these special guests free of charge to make this visit to the Capricorn region possible.

This activity is evidence that the international awareness for the Capricorn region is growing. This is thanks partially due to the success of the ‘Southern Great Barrier Reef’ brand but also the hard work of many operators like Empire Apartment Hotel, Edge Apartment Hotel, Travelodge Hotel Rockhampton, Quest Rockhampton, Oshen Apartments Yeppoon, Takarakka Bush Retreat, Salt Yeppoon and Great Keppel Island Hideaway, who are now receiving bookings from some of the largest Australian Inbound Tour Operators (ITO’s) for visitors from Europe/UK. These bookings are the result of working in partnership with Capricorn Enterprise in our Tourism Trade Distribution Mentoring program and ongoing familiarisation programs by key influencers. 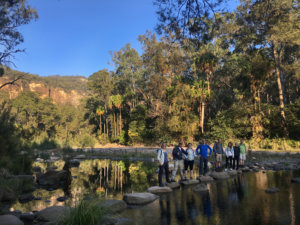