More than a decade after the closing of Great Keppel Island Resort back in February 2008, latest media speculation can now be confirmed.

Pat O’Driscoll from Knight Frank Rockhampton/Capricorn Coast is leading the sales process along with positive negotiations between the State Government, current owners Tower Holdings and a Sunshine Coast developer who hopes to be the new owner of the eagerly anticipated Great Keppel Island Resort Development.

With plans to construct a multi-million-dollar hotel and marina on the Southern Great Barrier Reef, Altum Property Group have entered a conditional contract to commence the sale process of the leases with due diligence, to begin the next chapter for Great Keppel Island Resort.

A privately-owned property development and multi award-winning construction company working with the very best architects, designers, town planners and consultants, Altum is committed to delivering first class assets and pride themselves on being a market leader in design and quality. Their latest master-planned development nestled amongst Noosa National Park (Parkridge Noosa) has been labelled as one of Australia’s most majestic locations.

Subject to the due diligence process, Altum Director, Rob McCready is ready to move on the Great Keppel Island Resort project as he believes now is the time for this critical tourism infrastructure.

“Great Keppel Island is the best island off the Queensland coast with the best beaches, a fantastic climate with half the rainfall of the northern Great Barrier Reef and no stingers” said Rob.

“We know that the development of a Resort on Great Keppel Island will largely grow the current numbers of 50,000-day visitors and 30,000 room nights per annum on the Island.”

“We have been impressed by the support of local businesses, Livingstone Shire Council, the regional tourism organization (Capricorn Enterprise) and the state government’s assistance to get to this point in what is a fairly complex process” he said.

Whilst the key parties involved have remained firm in respecting the privacy and commercial in confidence of the latest agreements, any information on the topic continues to be highly sought after by both media and the general public.

Leading the sales process, Pat O’Driscoll from Knight Frank appreciates that the process has commenced and not continued to completion previously, however, is confident that the due diligence being undertaken by Rob McCready and the team at Altum will provide the desired outcome.

“Having worked with the Directors of Altum for many months now, I am impressed by their attention to detail and willingness to work with all appropriate parties including our local politicians, Capricorn Enterprise and local business” said Pat.

“It is fair to say that of all the interested parties over the years to purchase Great Keppel Island Resort, Altum has exercised the most thorough due diligence.”

Capricorn Enterprise CEO, Mary Carroll feels that this is an exciting time for our destination in jobs and growth.

“When I was first introduced to Rob and his business partners some time ago by Pat and Anthony, I was impressed by their enthusiasm and genuine admiration and knowledge of the Keppels and our greater region,” said Mary.

“Altum are going about the due diligence process very carefully and astutely and have respectfully taken the time to meet with our local politicians including Livingstone Mayor, Bill Ludwig, State Member for Keppel, Brittany Lauga, and Federal Member for Capricornia, Michelle Landry MP to provide personal briefings.”

Altum Property Group’s purchase of the leasehold land on Great Keppel Island from Tower Holdings is conditional upon successful negotiations with the Queensland Government.

The Great Keppel Island Revitalisation Project has been approved by the State Government, Federal Government and the local Livingstone Shire Council.

The State Government has committed to delivering the undersea Water, Power and Communications supply cables and pipe project to facilitate the GKI Revitalisation Project, after the resort closed in 2008, and has elevated the project to Priority Status.

Alex Rigby said that “the Great Keppel Island Revitalisation Project is an exciting tourism development opportunity and together with the support of the Queensland Government can create the most iconic new tourism destination in Queensland.” 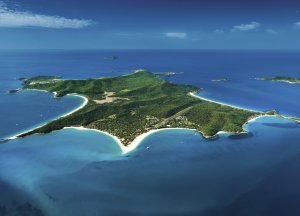